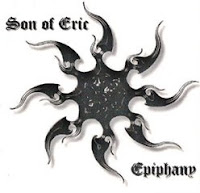 Hard biting classic rock from central Minnesota, the Son of Eric is the new band from Torok lead vocalist Bryan Erickson. Bryan not only sings on this release but plays all the rhythm guitar, bass and piano/synth parts.

Guest guitarists include Mike Torok the original Impaler lead guitarist (who recently rejoined the impaling ones), Shrapnel recording artist Todd Duane, Matt Graunke from Minneapolis’s Menace and John Lyell. Drums are credited to session drummer Greg Marrow though once in awhile you get the feeling that there is a drum machine behind the songs, most notably on “Black Rain Falls.”

The production is thin and snappy with slightly too much midrange warmth EQ’d out, not unlike the 80’s Shrapnel releases. However, the bottom line is that if you dig traditional mid-paced hard rock you will more than likely enjoy Epiphany. It’s decent and it does in fact rock - just don’t expect any surprises.

The touring band will include Epiphany co-producer Mike Jezmer on bass and his younger brother Mark Jezmer on drums.
myspace.com/sonofericband
Posted by Legendary Kingdoms at 8:21 PM No comments:

Hammer - No Way Out (self-financed)

Originally formed as Hellrider, Hammer had the goal of creating a “pure English style rock and roll group.” Well, true to their desire they have succeeded. The ten tracks presented here rock as hard as you’d expect a “pure English style rock” to rock. Nevertheless, the demo quality production and the moderately high raspy vocals initially give the impression that this band is simply a Motorhead lite. However, repeated listens enlighten you with their rough-n-ready underdog charm, revealing the bands obvious love for what they do - rock and have fun. If you’re looking for originality you’ll have to go someplace else, but if you’re simply looking for an album to get completely hammered to, then No Way Out may be the perfect release for your next gathering of local headbangers. www.myspace.com/hammerband
Posted by Legendary Kingdoms at 5:33 PM No comments:

“The Beginning” begins this swirling progressive affair of melody, riffs, atmosphere and splendid male and female vocal harmonies. Basically mix your old Dream Theater with your current era Nightwish and Blind Guardian and you should get a rough idea of what this sounds like.

The overall conception of this album is good and even at times exceptional. The guitar playing top notch. However, the lack of true dynamic contrast brought about by not having a full band and the ‘off’ mix as well as effects that are too processed sounding hamper what could be an excellent album.

There is a very distinct impression that Light From The Dark was rushed as the album screams with potential yet consistently fails to demand repeat listens. This could be remedied by

Posted by Legendary Kingdoms at 5:23 PM No comments:

If you enjoy solo albums by the likes of Joe Satriani, Steve Vai and so on, then you will probably appreciate this release as it falls into the same realms of melodic shredding. So as I’m sure you have already guessed, the guitar playing is fantastic. But what you might not have guessed is that John not only wrote all the music here, but played all the instruments as well. This includes keyboards which add atmosphere and feeling proportionally and appropriately. However, the eleven individual instrumentals aren’t even named, just listed as roman numerals.

All in all, I can’t say I’d recommend this flight of fancy to anyone but shred metal aficionados; unless of course, you like really great background music. Personally, I believe John would be better off trying to get this mood music used in cinema, where at least it would have the possiblity of having some kind of profound impact.
Posted by Legendary Kingdoms at 4:32 PM No comments:

They describe themselves as “mediterranean death metal.” A fitting description for these Italian metal men. Though if the vocals were more a bit more decipherable this album would fit right into the 80’s and 90’s thrash genre as the guitar playing is typical of thrash’s carefully controlled carefree riff attacks - quick, energetic and imbued with an ironic sense of fun. Be that as it may, I find the best part of the album to be the short instrumental “In My Temple.” It stands apart from the rest of the album with its ballad like nature, and is a much needed relief from the tiresome death vox. For fans of Arch Enemy and death metal in general.
www.mutala.it
Posted by Legendary Kingdoms at 4:05 PM No comments: